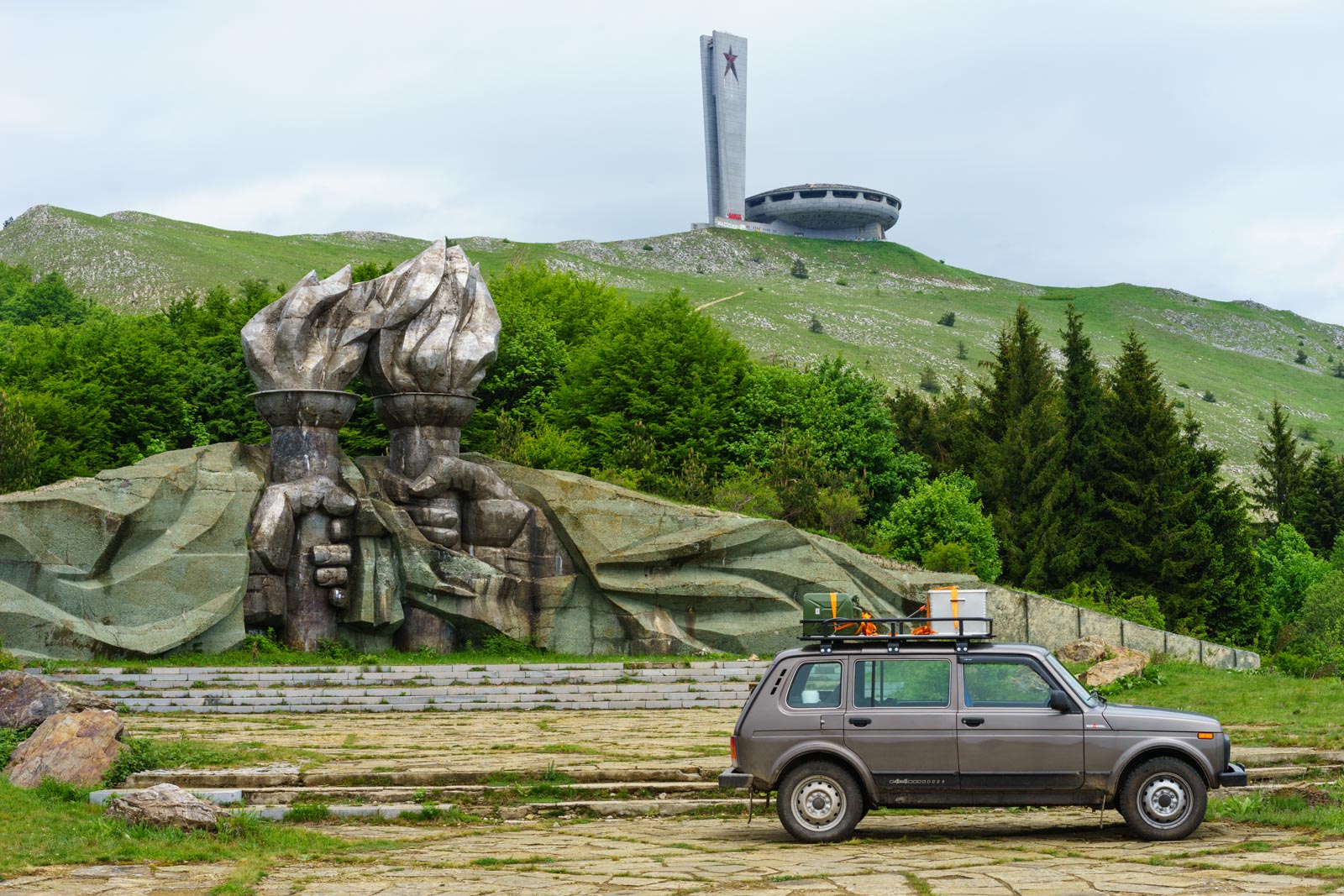 After a great morning hike in Kotor, Montenegro, I drove through Albania during the day and arrived at Sunny Lake Hostel in Ohrid, Macedonia in the evening where I immediately felt at home.

The place is led by a great guy named Joko and, unlike the last place I stayed at, their policy does not exclude people over 40 from staying there, meaning you can actually meet experienced travelers who have seen a lot of the world and are eager to share their stories.

I went to bed early that night to be ready to explore the lake and its surroundings the next day.

During breakfast it became clear that the plans for most of us staying at the hostel were quite similar for that day: Visiting Sveti Naum, a monastery on the shore of Lake Ohrid 29 km south of the city of Ohrid, and going for a hike in Galicica National Park.

So there formed our little group of four: Tina, bikepacker from Bielefeld who has been traveling for almost a year and is riding for 150-200 km per day; Lars from Dresden, spending only a long weekend in Macedonia; Stanislav from Bulgaria, physicist, doing his PhD in Wales, having an injured knee but still wanting to go hiking, and me, the German guy with the Russian car. 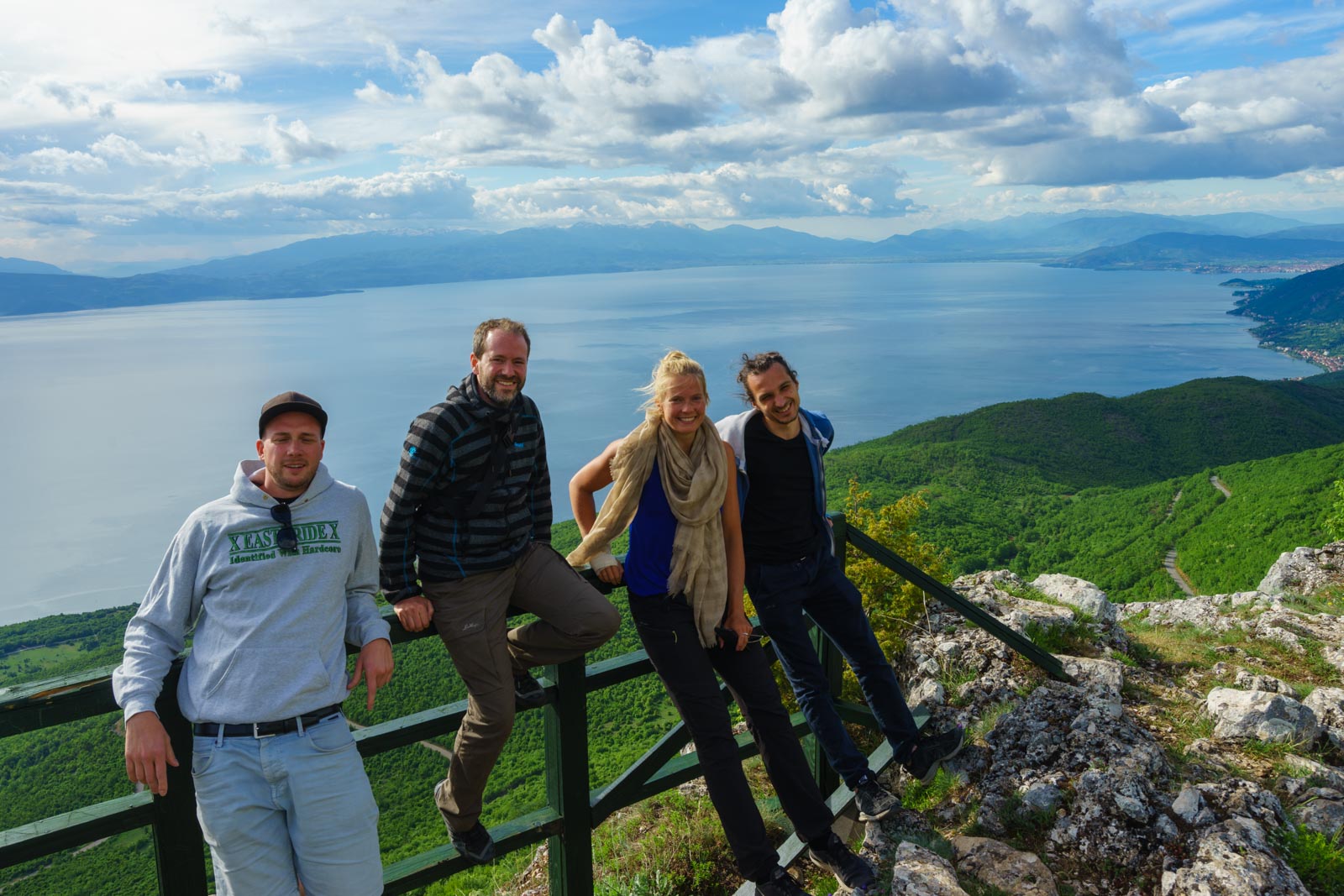 First stop: Sveti Naum, which is an Eastern Orthodox monastery that has been established in 905 and is named after its founder Saint Naum. 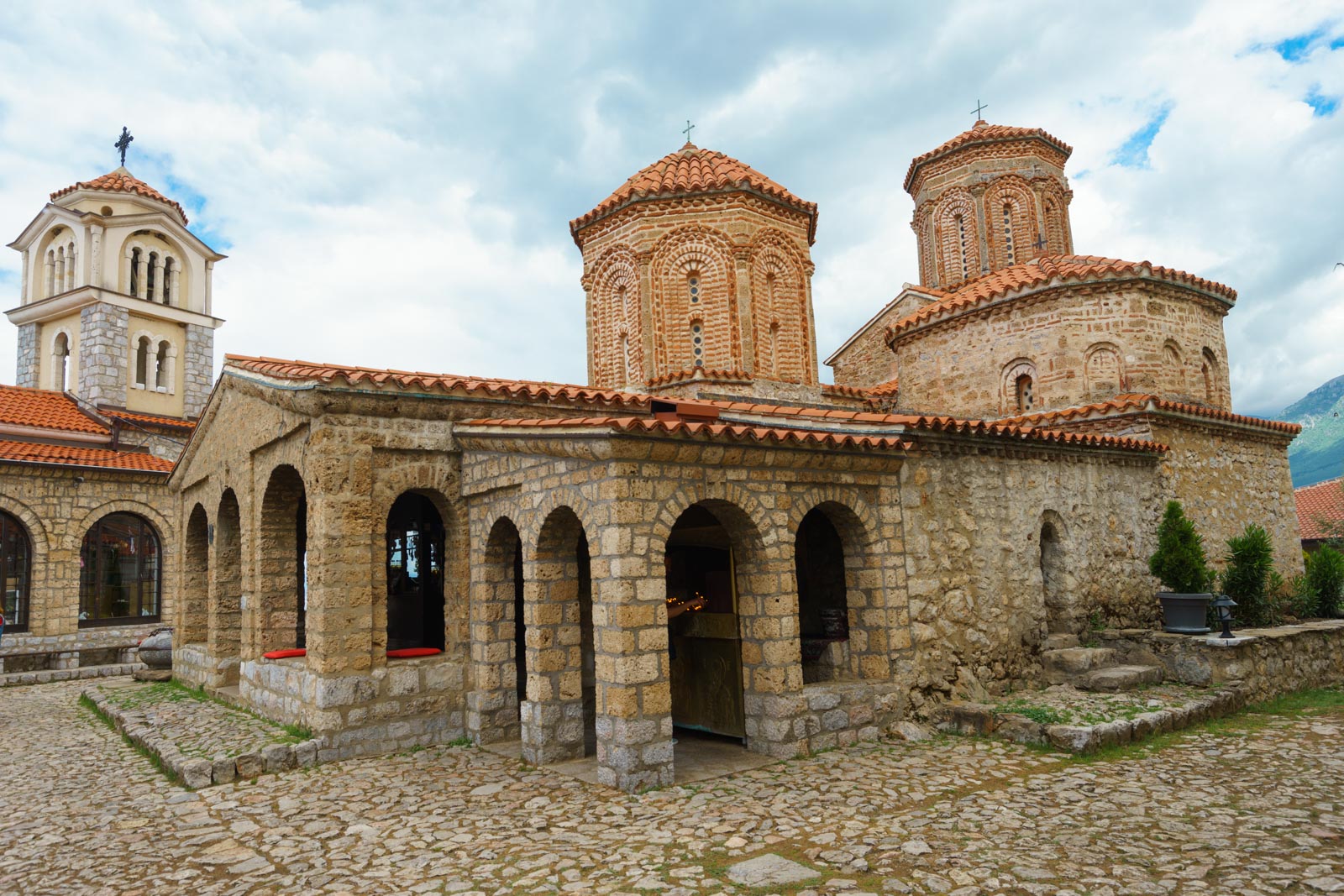 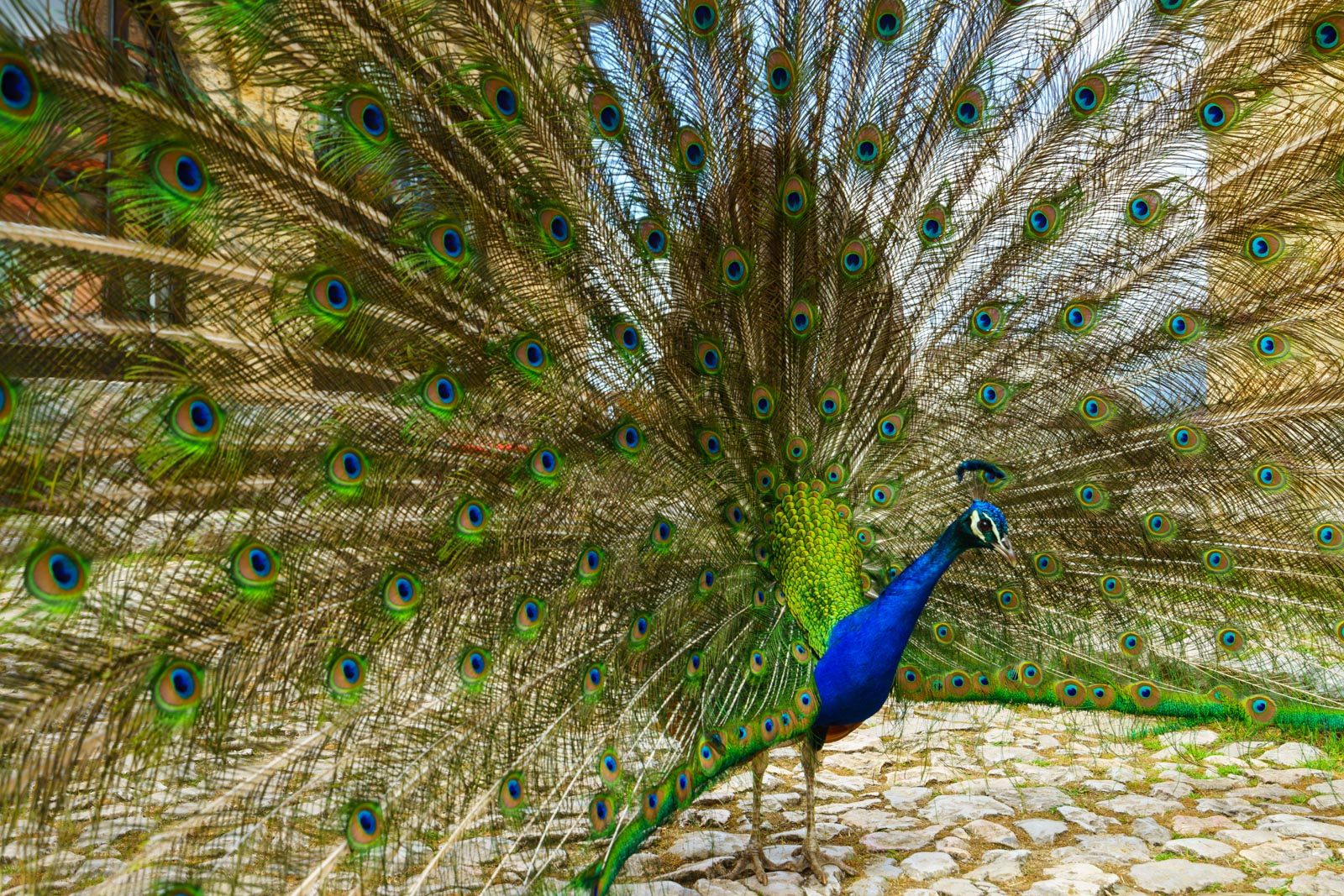 One of the many peacocks inside the monastery

From there we went to the lake and then took a turn into the mountains and into Galicica National Park for some hiking.

But as everyone seemed to be more interested in driving Fräulein Niva into the woods than they were in the actual hike, we took her up the hill as far as possible before we started walking.

After a few meters I heard music behind me. DJ Lars had started his boombox.
A couple of minutes later we were standing in snow. Stanislav clearly had problems with his knee walking up the steep path but was fighting his pain.

After another few minutes we came to a fork in the path. The way to the summit would take another fifty minutes.

As it was already late in the day, started storming, was almost raining and we had a wounded with us, we decided that it’s the idea that counts and began walking back down.

When the rain started we just had to make a break to cherish what we achieved that day.

I looked around after I opened a can of beer and there was Lars sitting with an umbrella expanded over his head. That man was better prepared than Bear Grylls.

The next morning Stan and I set out for Rila Monastery in Bulgaria.

At the border from Macedonia I got the next indication that our choice of the vehicle for this trip was the right one. Every border police and customs officer seemed excited and surprised that a German guy would drive a Lada Niva all the way east to Mongolia. They asked many questions about the trip and assured us that this would be the best car to do it.

After a lot of well wishing we crossed the border and were back in the EU.

Rila Monastery is an Orthodox monastery that was founded in the 10th century and is part of the UNESCO world heritage. It is located in the Rila mountains in the southwest of Bulgaria and is the biggest and considered to be the most important monastery in Bulgaria.

The best thing about it: you can stay in one of their guest rooms overnight for just 10 Lev (5 EUR) per person.

This means you can wander inside the monastery’s walls during the night when all of the other tourists visiting each day have long disappeared.

There are just a few things to be remembered:

Be there before 7 PM as the guest registration office closes after that.
There is no dinner or breakfast served inside the premises but there are a lot of good restaurants located nearby. The doors of the monastery close at 9 PM. Be sure to be back inside by then. If you arrive too late to have dinner out, go to one of the restaurants and order something for takeaway. This is what we did.

You can make a reservation beforehand. Just call the phone number from their website as the email address listed there does not work.

As Stan wanted to go to Sofia to visit his family before he had to return to Wales, and I wanted to visit the Buzludzha Monument, our ways parted the next morning.

On my way, I did a short stopover in Plowdiw, which is located just two hours southwest of Buzludzha, hoping to find some other travelers interested in visiting the monument together. I was out of luck. The hostel I stayed in was almost empty and people already had other plans. So I went on my own.

The Buzludzha Monument – after all the pictures I saw, I was so damn excited to see the thing with my own eyes.

It was built by the Bulgarian communist regime on the peak of Buzludzha, which was the place of the final battle between Bulgarian rebels and the Ottoman Empire in 1868. It was opened in 1981 and has been abandoned after the fall of the regime in 1989 and is deteriorating ever since.

I was greeted by this huge statue at the foot of the mountain and knew I was on the right path. 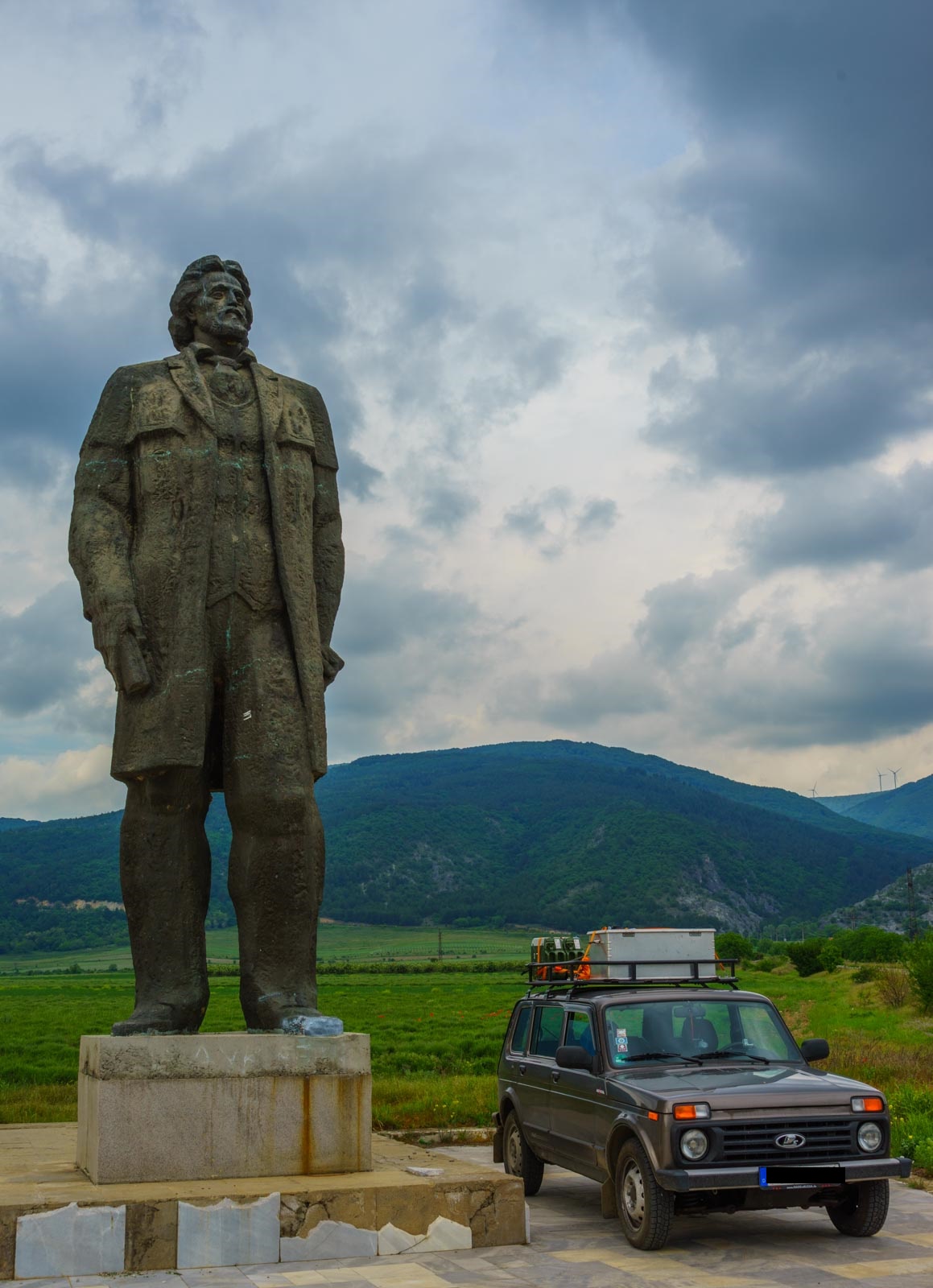 Following the windy road up to the summit, the monument suddenly appeared high above. 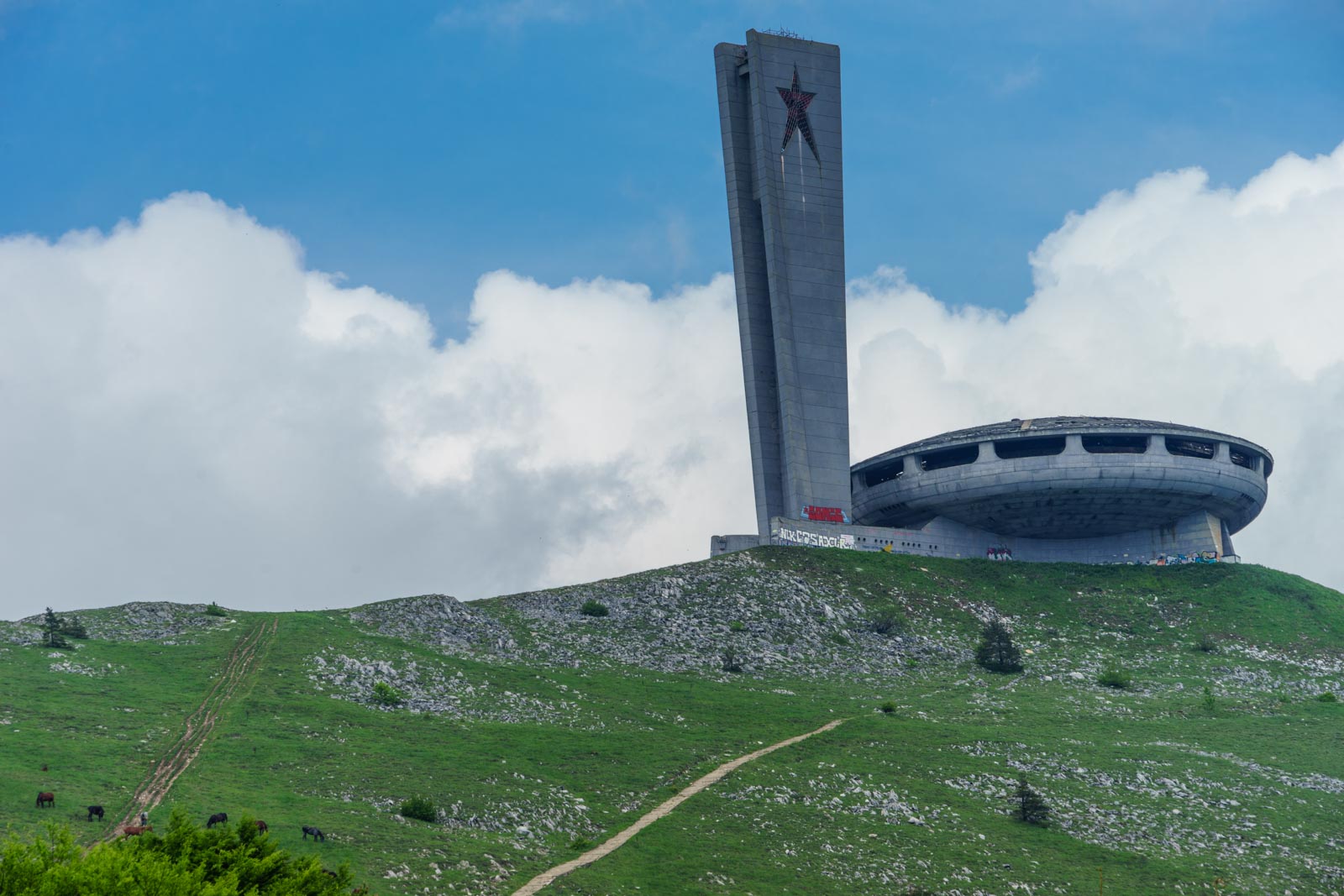 I was in awe. When I got closer I realized that thing is way bigger than I thought. 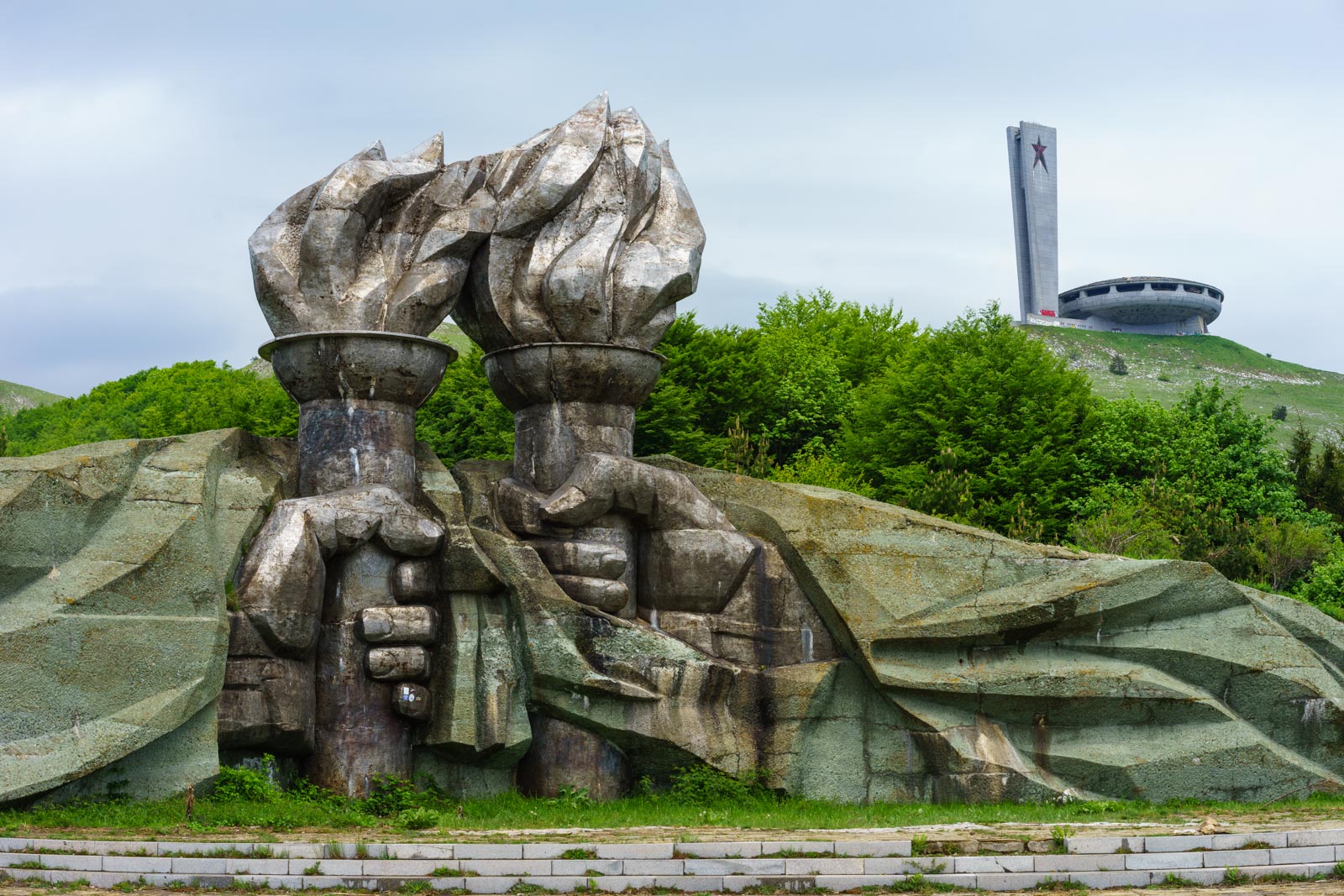 To have a closer look I climbed up to the monument itself. 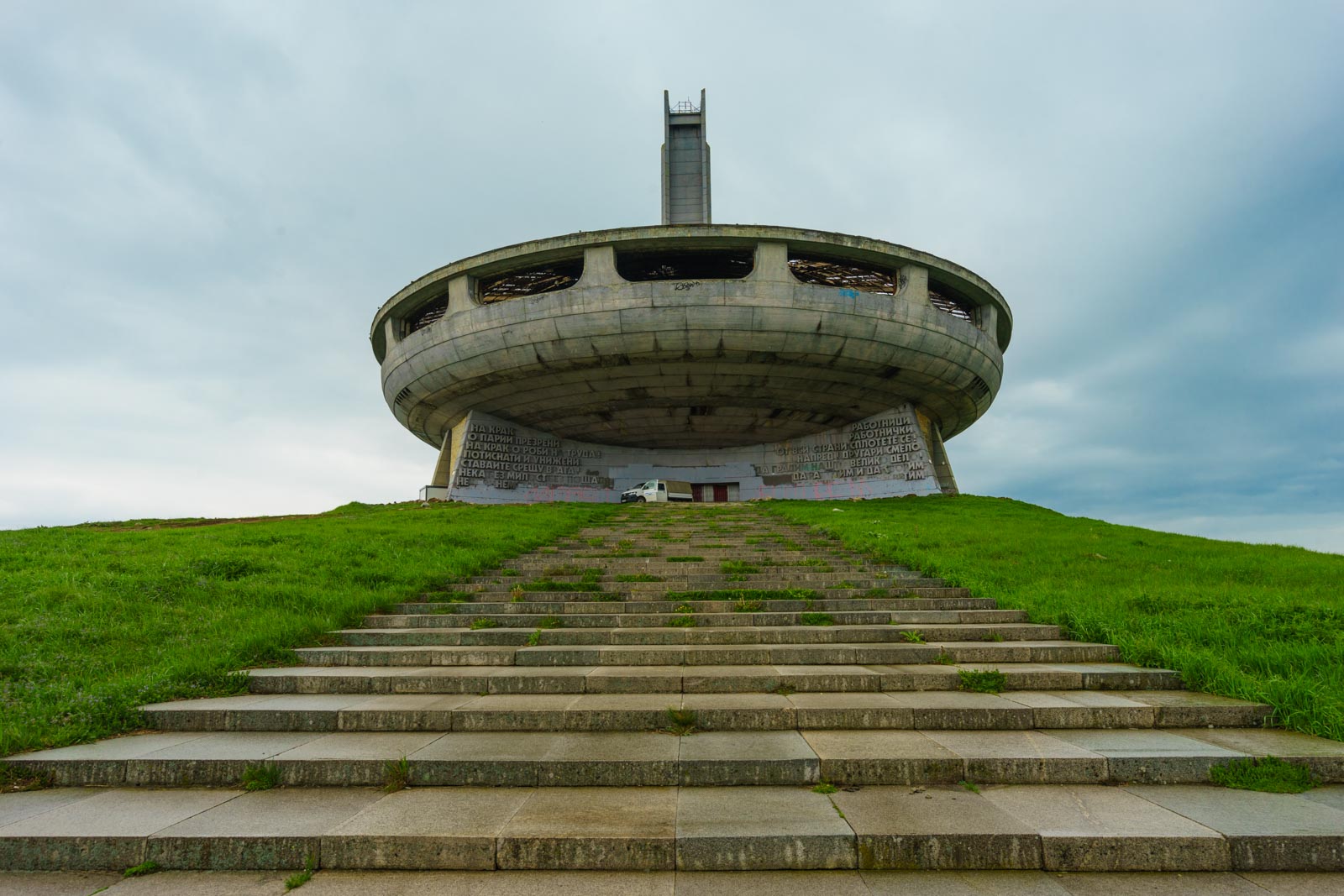 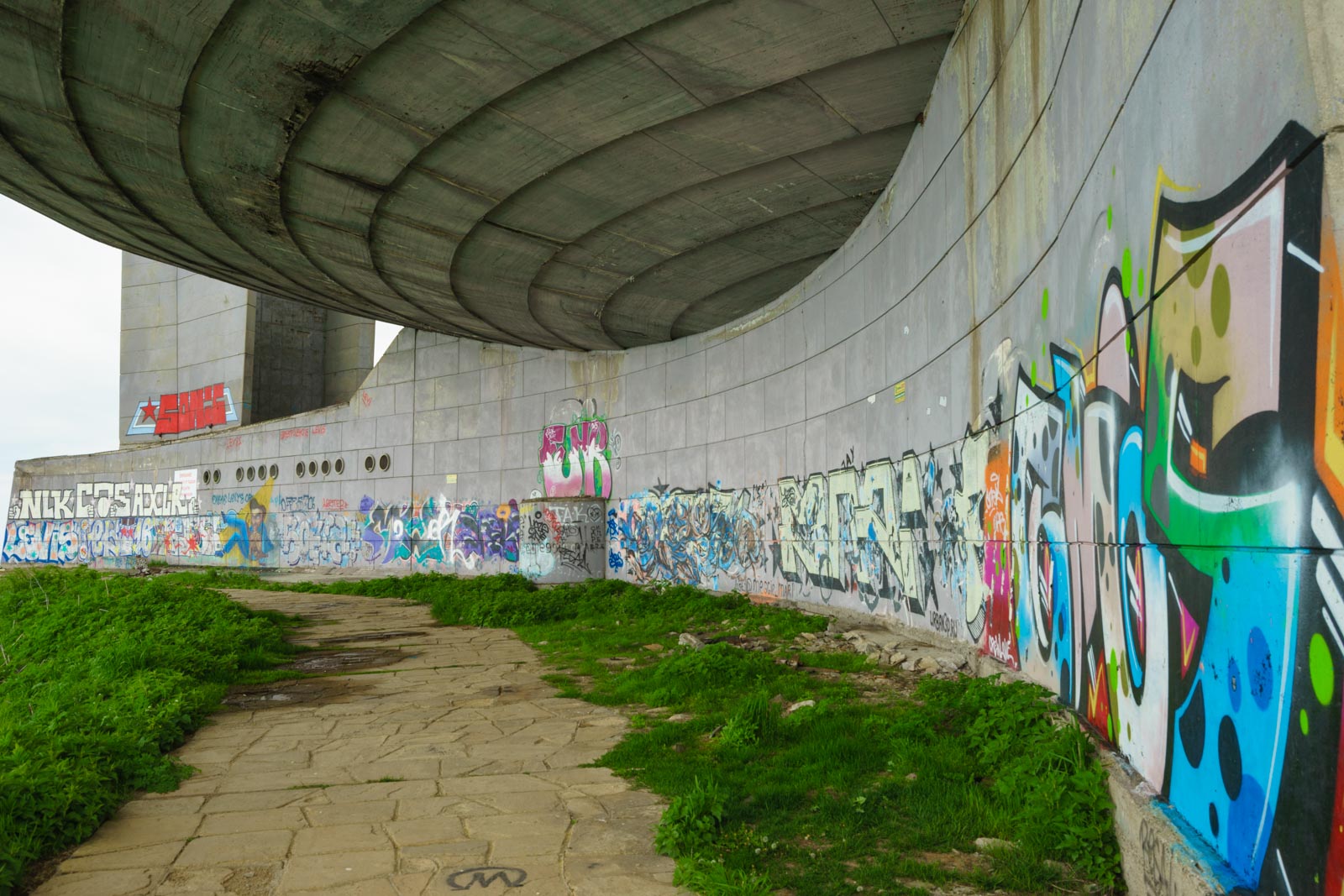 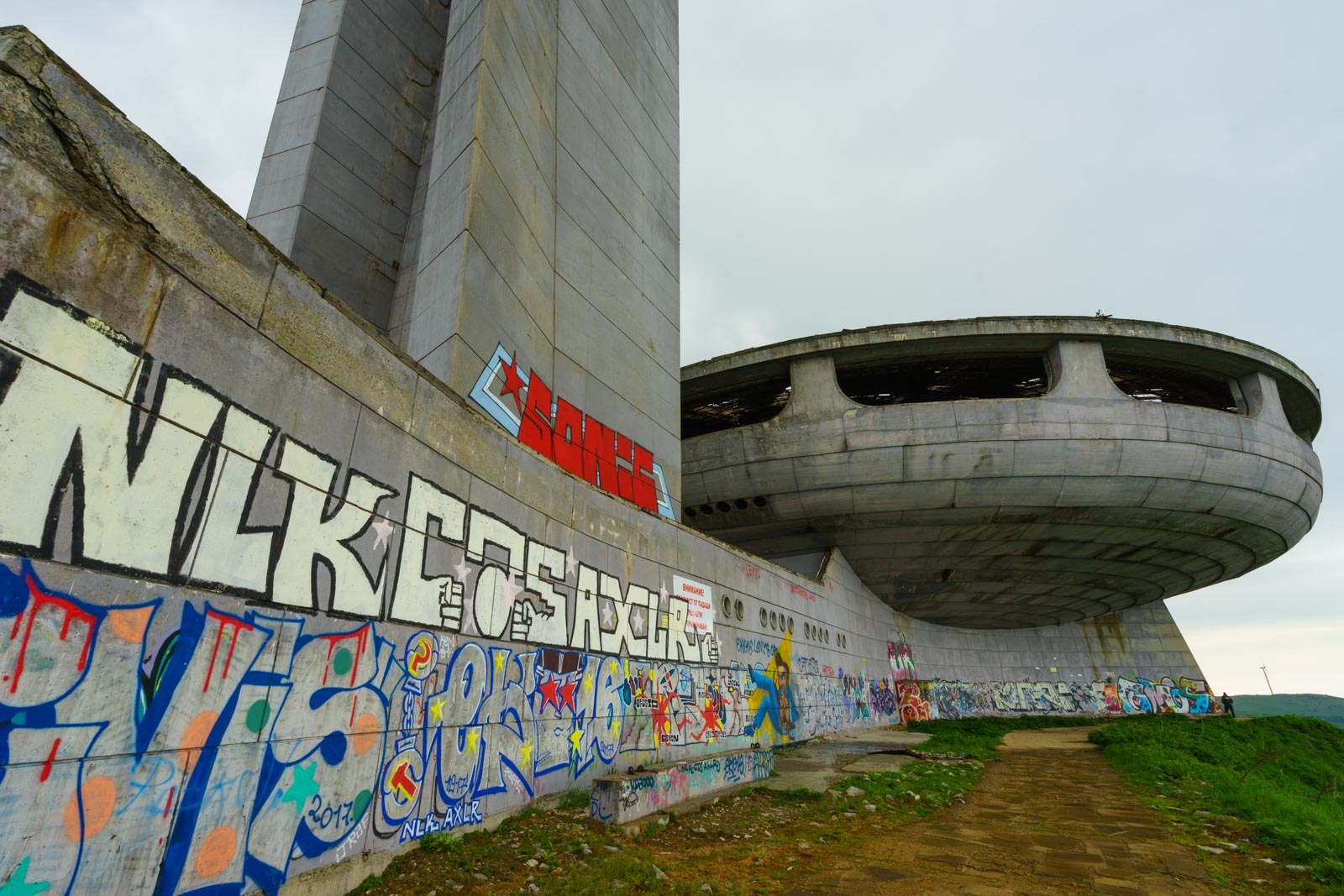 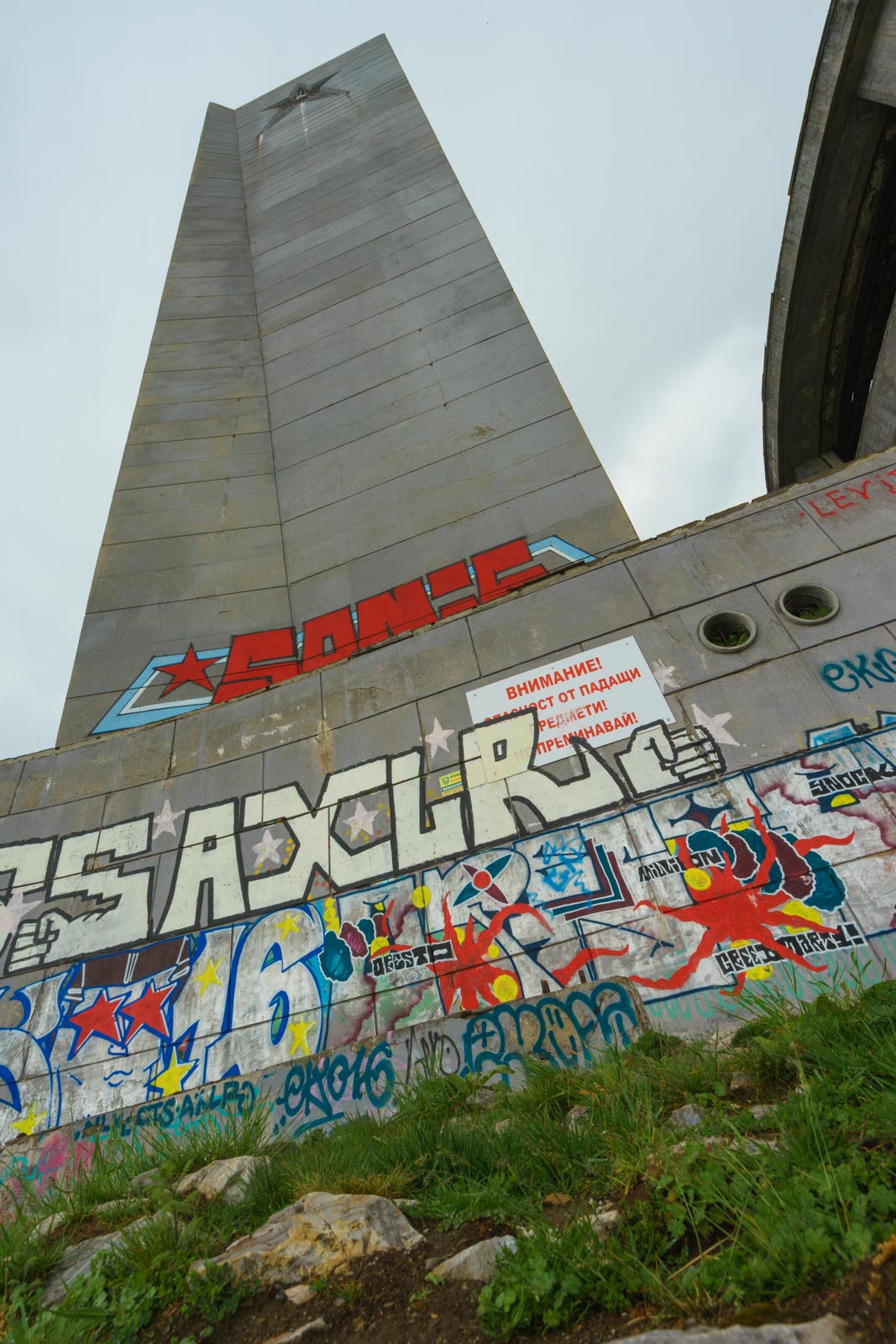 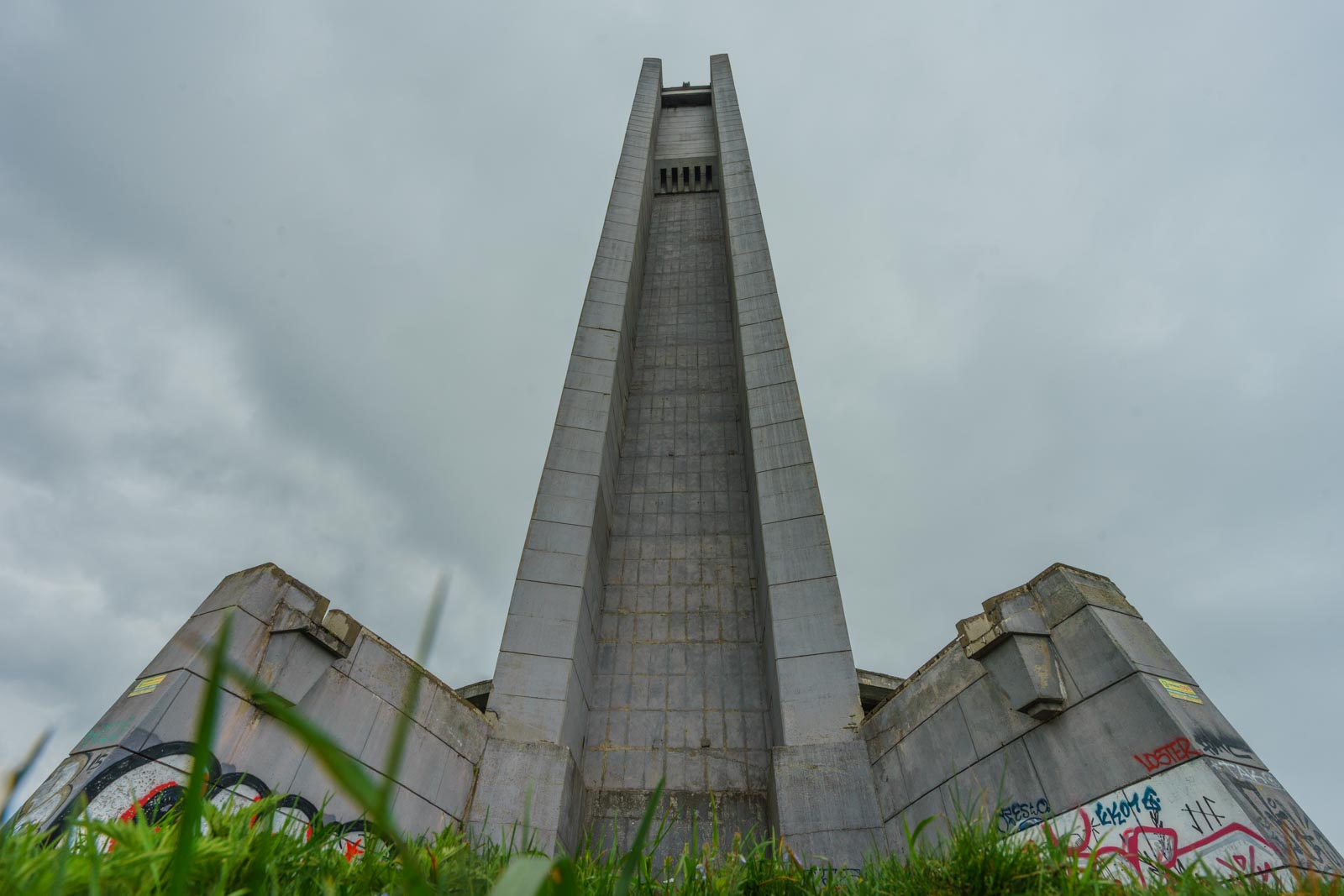 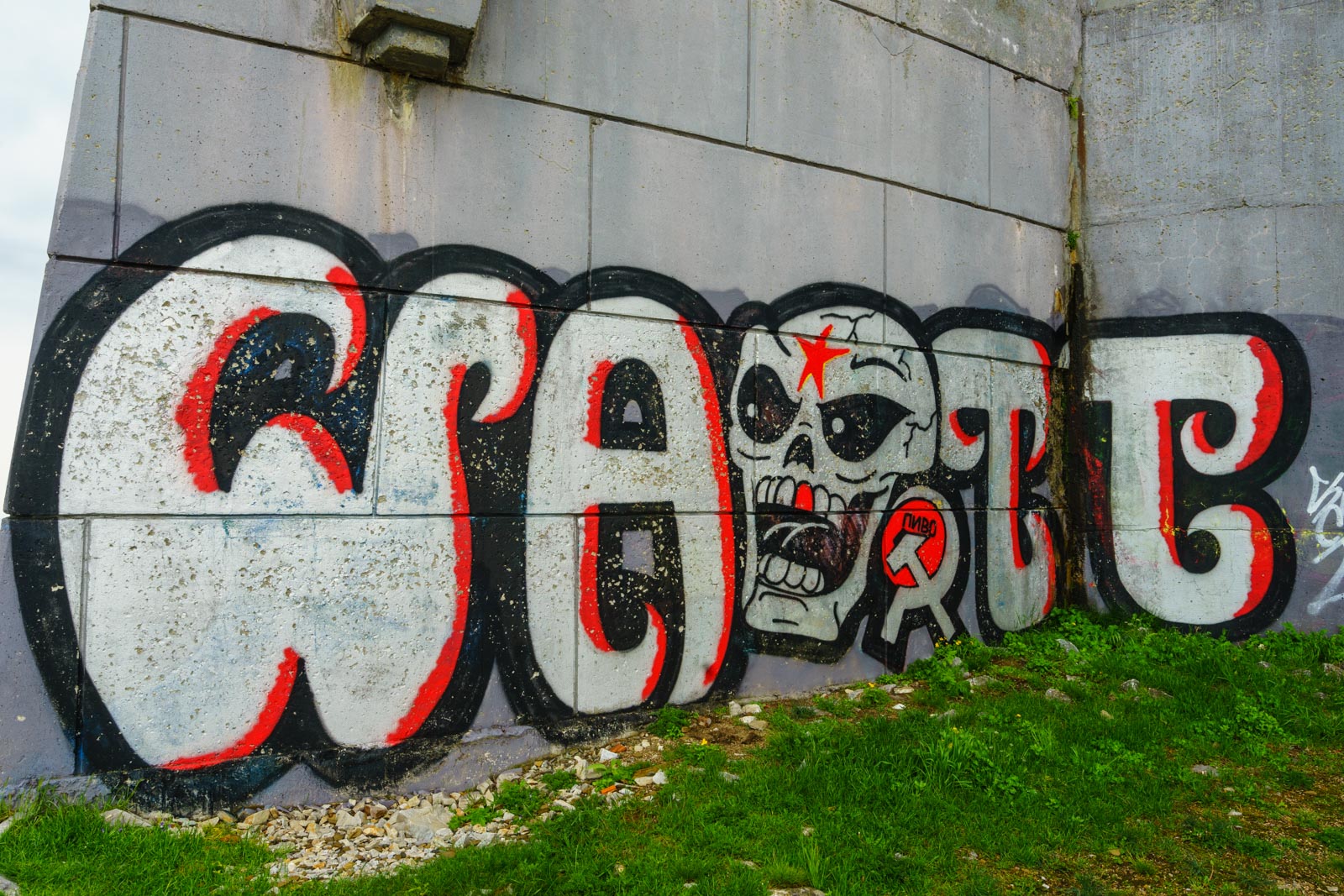 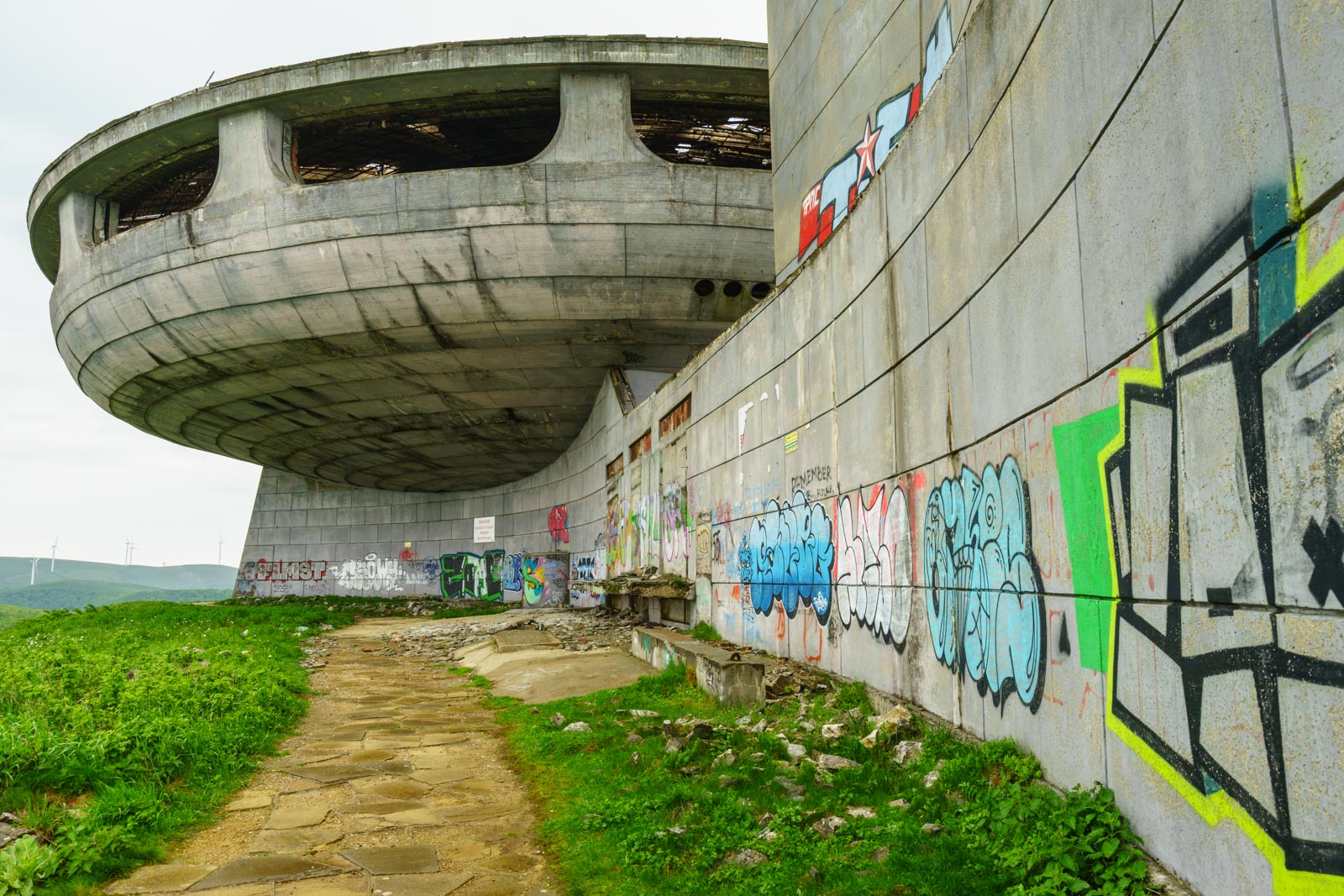 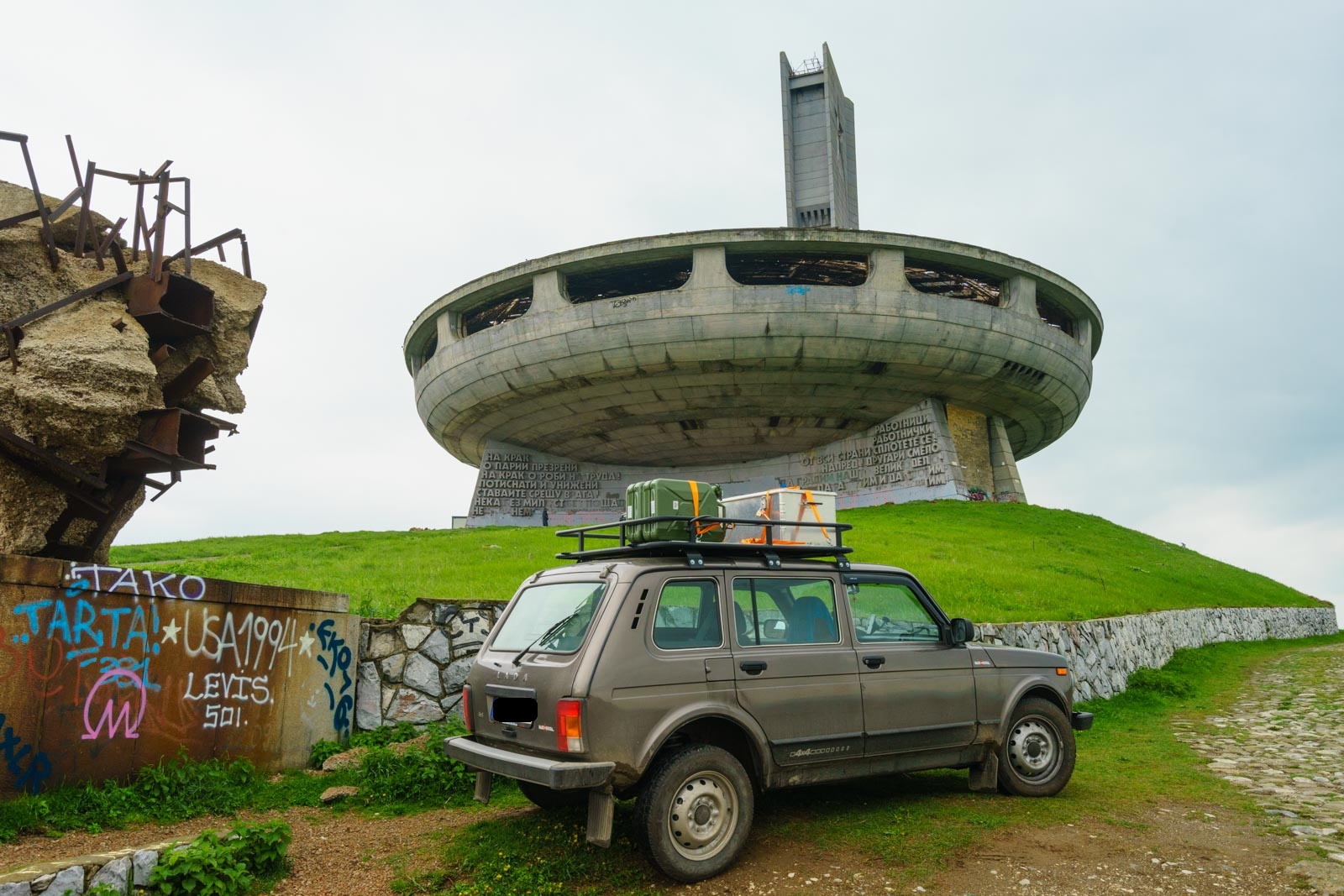 Unfortunately the information I received at the hostel in Plowdiw was true: Police started guarding the building 24/7 two weeks before I arrived to prevent people from entering. So there was no way of getting in. I was thinking about handing over a bottle of sweet rakija I brought from Macedonia but the cop clearly wasn’t of the humorous kind, so I didn’t try.

You can easily spend a whole day exploring the Buzludzha Monument and its surroundings.

Before I continued my journey to Istanbul, I stayed the night at Hotel Perenika in Shipka which I can highly recommend. It is an inexpensive and very clean place with great breakfast and nice owners.